Toy Breeds In Need Rescue
In loving memory...
Gabby
"All that we love deeply, becomes a part of us." 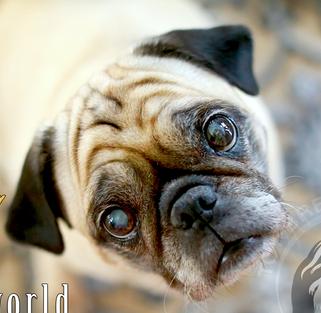 I will never forget the day that my hands first held you.  How I felt like I had been set on fire with the urge to fix all the wrongs you had endured.  I watched you help heal Nico, my beloved son, as you became my daughter.  I watched your innocence and your playfulness help him to find what 7 years of hell had robbed him of: joy.  I watched you gain confidence.  I remember holding my breath every time you were about to attempt something new.  Something you always did so fearlessly.  You had every single right to close yourself off from humans, but you never did.  Instead, you were a beacon of light, love and the purest and most gentle soul I have ever known.  When we learned that your heart was struggling, I felt the same fire of determination to defy the odds and help you live longer than the vets predicted.  You pulled me through some of the roughest times of my life just by being yourself.  I was determined to do the same for you.  You never complained about the medications and though I am sure you felt how scared I was, your strength and resiliency never wavered.  You were always stronger than I realized.  I fell in love with your soul - never really realizing just how frail the body that encompassed it was.  Little did we know that as you were unfurling your pristine petals, you were also stretching your angel wings.  I know you were ready to go run with Nico again, my love.  I know that right now you are again in the sun, the wind blowing through your silky white hair.  May God hold you in his hands until I can once again hold you in mine.  I love you sweetheart, and I will carry you with me all the days of my life.  Above all, know that you are mine, and I am yours.
​

Gabby was an 11 year old Pug that TBIN was asked to help when her current guardian could not offer her the care she so desperately needed.  When we learned that Gabby had been diagnosed with Diabetes a few weeks prior to them contacting us and had not been receiving any insulin, we knew she needed immediate veterinary attention. Untreated Diabetes is fatal and we knew that Gabby would need a great deal of TLC. Sadly, because Gabby had gone without proper care, she had hyperglycemia (her blood glucose was in the 600-750+ range) and so she developed ketoacidosis which is a very serious complication of Diabetes.  Our vet felt that had Gabby gone for much longer without care, she would not have made it.  We worked tirelessly with our veterinarians to manage her Diabetes during the three years she was with us.  Unfortunately, Gabby was diagnosed with Cushing's disease which was a devastating blow for her.  While we fought both diseases, in the end, they overwhelmed her little body and she passed on.  She is very much missed and will be remembered for the sweet girl she was.

Be at peace little one.

Nico spent the first 8 years of his life in a cage at a puppy mill.  A victim of greed, he was then discarded when he was no longer of use.  TBIN was told that if we did not take Nico, the breeder had planned to shoot him.  We were also told that Nico had a simple hernia but what we learned upon taking him to a vet was that the bulge on his abdomen was caused by a bite wound that was never treated.  Nico underwent surgery to repair the hernia and the vet reported that his "insides were a mess".  Due to years of neglect, Nico lost all of his teeth.  We later learned that Nico was the victim of an "at home" debarking.  His head, neck, and back were covered in scars.  He suffered so much.  It took many months for him to become comfortable with his foster Mom but, when he finally did, the two fell in love.  He was the most amazing soul.  Our lives will forever be changed for having had the opportunity to love this sweet boy.

I had planned to write a letter to the man who did this to you.  Not that he would be reading it but as a way to exorcise a small amount of the ridiculous amount of pain that he inflicted on you, and by proxy, me.  I then realized that he didn’t deserve that  Though the bulk of your life was spent with him, it wasn’t about him.  Your life was always your own, and this is your story.  If ever there was a soul to inspire me, to move me, it is yours.  You never pitied yourself, even though you had every right to.  Despite the overwhelming odds stacked against you, you survived.  Not only did you survive, you learned late in your life how to let someone love you.  You let me love you, even when I know you were terrified.  I will always be grateful to you for the lessons you taught me and for letting me in to your world.  I have no doubt that I am a better person because of you.  Though our time was short - far too short, I feel like you and I had a lifetime together.  I think you know that I would have given anything that was mine to offer to save you.  I will ache for the weight of you on my chest and I will probably wake up a thousand times, reach out for you, and then be overcome with the realization that you are not there.  You will always and forever be one of the greatest chapters of my whole life.  For as long as I live, I will cary you in my heart.  I know that your story is one that most people will see as sad but, you and I know will always know the overwhelming joy that we shared and the transcendent amount of love that we had for one another.  I have to believe that a love like this never ends so, I know will see you again my sweet Prince.  Nico, Mommy loves you so very much.  Ours will always be one of my most favorite love stories.  Fly on my sweet angel. 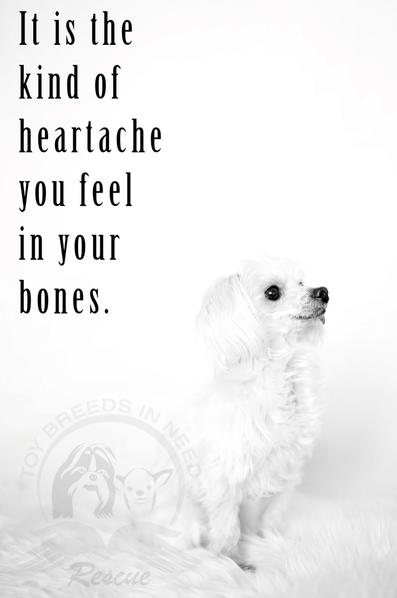 God softly called down to us and sent his best angels to carry our sweet boy home to Him. He is now at peace and free of the broken body that was just too frail to hold the fierce spirit he was blessed with.

Within moments of meeting Beans, I knew he was one of the very, very special ones. He has left an indelible mark on my life, and my heart.

I am the lucky one. I am the one who, out of 6 billion people, was chosen to be HIS person. His Mom. The one who was blessed to bear witness to the beauty of his life, and the grace with which he carried himself despite all he was given. I am so grateful for the time we shared together.

I will carry on and honor his life. I will find a way to put the pieces of my broken heart back together and continue to help dogs like him - those that are forgotten and deemed unworthy by others. Because, to me, they all matter. They are all special and when you open yourself to those most in need, you find the diamonds…you find the ones that give you purpose, inspire you, and change your life. They are a gift to be treasured.

I hope that you read this and that you are moved to do something - to ease the suffering of another life, to make a difference, to be part of the solution. Help us honor the life of our son and make a difference in a homeless dog’s life.

Run free Sweet Beans. Mommy and Daddy will see you again in Heaven and, until then, we will hold you in our hearts.

Lotus is a 2 year old Maltese weighing a mere 4 pounds.  She spent the first 18 months of her life in a tiny metal cage where she was forced to live in her own waste.  Like so many dogs, Lotus was born in to a Puppy Mill where her sole purpose was to produce puppies.  Lotus' little body was unable to produce puppies (most likely due to the neglect and malnutrition she suffered) so she was discarded by the breeder.  When Lotus was surrendered, much of her hair on her rear legs and back were missing due to urine scald.  Her muscles were weak and she walked with a hunched posture from having spent her entire life in a cage - never being let out.  She was skin and bones, filthy, and scared. After visiting with multiple vets, we have learned that Lotus has a Grade VI heart murmur and cataracts in both eyes (along with luxated lenses in both eyes).  Lotus is now almost completely blind as the cataracts in her eyes matured.  While surgery would be an option for some dogs, Lotus' heart condition makes surgery extremely risky.  Lotus has just been through so much.  Due to her extensive medical issues, Lotus will remain with TBIN as a hospice dog.  Lotus endured day after day of being handled roughly, not having enough to eat, and being isolated for much of her life, but here's the amazing thing about this little girl...you would never know any of that if you met her.  She holds no grudges, is nothing but pure sweetness and is a joy to be around.  Lotus will never again be hungry, mistreated, or locked away.  She will receive the highest level of veterinary care, sleep in her foster parent's bed, spend her days snoozing on comfy beds and snuggling with other dogs.  She is an utter joy and we are blessed to have her in our rescue. 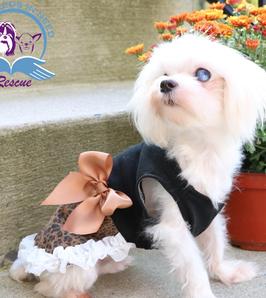 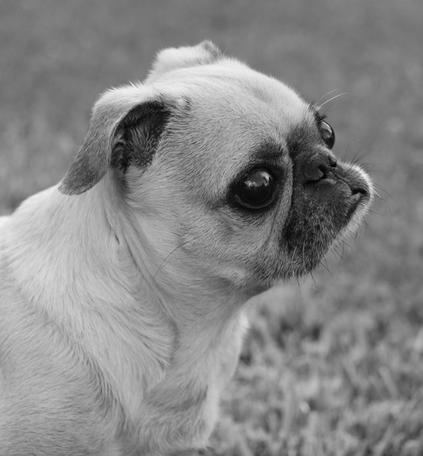 Beans is Toy Breeds In Need Rescue's hospice Pug, and quite possibly, our mascot.  Beans was lovingly surrendered by a kind family who had no choice but to relinquish him when they had to move overseas.  We were told that he was 10 years old (he is now 11), was blind, and was epileptic.  When we took him in, we quickly realized that there were additional issues that needed attention so after seeing our fabulous vet, as well as some specialists (Neurologist and Ophthalmologist) we learned the following:  Beans' blindness is due to retinal folds.  As such, nothing could have been done to cure or prevent his blindness but, Beans compensates extremely well.  He likely suffered a herniated disc at one point and has some neurological issues (he has very little bowel or bladder control so his hospice parents express him frequently).  Without doing an MRI, we cannot be certain what causes his seizures but, they are well controlled with a combination of a prescription drug and various holistic supplements prescribed by our vet.  Despite all of this, Beans is one of the most amazing dogs that we have ever met.  He has been with us for several months and given the number of issues he has, we have decided that he will just live out his life with us.  He loves his organic food, spending his days in soft fluffy beds, sharing the couch with his family in the evening, and strolling around his fenced yard on sunny days.

Beans is the perfect embodiment of what we are all about.  Our belief is that ALL dogs deserve to know kindness, compassion, and wellness.  He is one of the sweetest, most affectionate and endearing dogs we have ever been given the opportunity to love and we truly cherish every single day he shares with us.